The American automotive giant, known as GM, is partnering with IBM to equip cars with e-commerce technology, allowing drivers to order food, fuel or even reserve hotel room through the vehicle’s dashboard screen.


The technology will first be uploaded automatically onto ca. 1.9 million vehicles of the model-year 2017 before being available on new vehicles. By the end of 2018, 4 million cars from the Chevrolet, Buick, GMC and Cadillac brands will be equipped with the marketplace technology in the United States.


GM’s marketplace has been designed to be used while driving. Manual interactions are minimized, helping drivers keep their eyes on the road and their hands on the wheel. 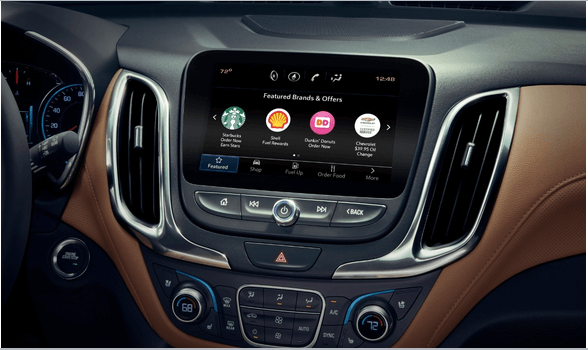 “The average American spends 46 minutes per day on the road driving. Leveraging connectivity and our unique data capabilities, we have an opportunity to make every trip more productive and give our customers time back,” said Santiago Chamorro, vice president for Global Connected Customer Experience, GM, as reported in their press release.


The service, and the implied data transfers, will be free of charge for customers. GM will get paid for placing a merchant’s application on its screens, and will also receive an undisclosed share of revenue from the merchants.
The marketplace faces a strong competition. Hand-held smartphones have a larger offer than the marketplace at the outset, through the vast array of apps available. Amazon.com has already announced partnerships with other automakers, namely Ford Motor, to offer in-car e-commerce capabilities through Amazon’s Alexa personal assistant system.


At launch, the marketplace will feature fuel offers from Shell and Exxon Mobil. TGI Fridays will allow for in-car table reservations. Parking and food ordering apps will be available from launch day. To this end, partnerships with Starbucks, Dunkin’ Donuts and Applebee’s have been unveiled.


GM plans on expanding its marketplace to offer music, news and other information services. The company further hopes to use its in-car marketplace connections to expand purchases of products and services, for example by offering in-car WIFI or GM replacement parts business and dealer network.

The $740 million joint venture, between Dubai Airport Free Zone Authority (DAFZA) and wasl Asset Management Group, will be the first e-commerce free zone in the region.

The Swedish furniture retailer giant reported that, after growing by 10% in 2017, its e-commerce business reached 15% of its British sales.